Visit us on Facebook or send an email!
Here are 72 profiles of the Splawn Quick Rod, a 100 watt modded marshall style amp. The Quick Rod features a clean and an overdrive channel, only the overdrive channel is profiled here. It has regular controls for the overdrive channel but adds 'gears' which start at first gear and add gain each time you go 'up' a gear to 3rd gear. The amp also has an overdrive 1/2 footswitch, which allows you a little more gain and saturation for each gear. Add to this a solo level and you have an amp that looks simple at first but has a variety of tones inside. Nice thing about the Quick Rod is that it has a great Marshall sound but isn't too tight like some amps or too flabby - for many of us, it's just right.
Audio track below is two tracks, same guitar I profiled with so anyone using my GTM setup should be able to get these guitar amp tones easily. Reverb and delay were added after recording the tracks. 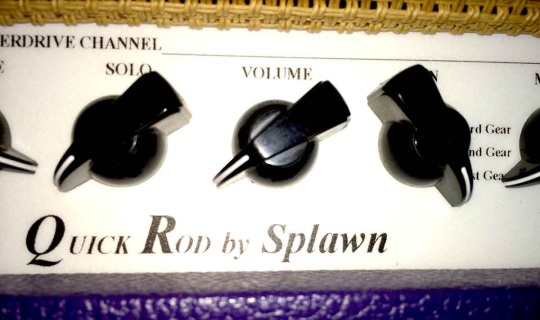 $10.00
Add to Cart
72 Splawn Quick Rod profiles from lightly overdriven to modern saturation. Overdrive channel only, from first to second to third gears and overdrive one/two on each profile. Modded Marshall and hot rod 80s tones abound here!
All amp brands and names, and band/song info used in descriptions are trademarked by their respective owners and are in no way affiliated with Pete's Profiles.  KPA profiles found here are attempting to re-create the sound of the amplifiers listed. ANY use of brand names here or within the profiles is only for descriptive purposes and for those of comparison.
©2015 Pete's Profiles LLC | World Headquarters Tulsa OK 74129