One of the nice things about the Kemper Profiling amp is how customizable and configurable it is. There are two jacks on the back of the Kemper - usually used for controller pedals. You can assign a Wah, Volume or Pitch pedal since Firmware 2.0. Well, the MIDI also works great too, so you can hook up your controller pedals through a MIDI pedal, freeing up these jacks. What can we do with them?

Each pedal can have two switches hooked up to it. So for the dual pedal below, it will plug into one jack. The quad pedal needs both jacks.

An example - The Quad pedal could be set with Stomp A/B on the two left buttons, and X/Mod on the two right. Or Stomp C/Mod on the left, and Tap tempo. unfortunately at this time, if you use Tap Tempo, Tuner or some of the other singular options below it will leave a button unused. This is a limitation of the Kemper currently, not the footswitch.

Rig Up/Down - you can use a two footswitch pedal or half the quad to go up and down through your rigs. This would be GREAT for an emergency setup if your MIDI pedal failed at a gig or if you don't want to bring an entire MIDI rig to a jam or rehearsal.
Stomp A/B - two footswitch pedal, or half of the quad - controls the A and B stomp boxes.
Stomp C/D - as above, but C and D stomps.
Stomp X/Mod - X and Mod slot control.
Stomp Dly/Rev - controls Delay and Reverb on/off
Stomp B/X - B pedal and X slot control
Stomp C/Mod - C pedal and Mod slot control
All of the below features are mono only. You can access them with a single footswitch, if you use a stereo then only one of the pair works.
This is a limitation/feature set of the Kemper Profiling amp and not a flaw with the footswitch.
Tap - use as a Tap Tempo
Tuner - gives control of the Tuner off/on
Stomps - control over all stomps at once
Reference Amp Hold This is useful when profiling - it allows you to switch over to the reference amp ONLY while the button is held down. COOL!
Stomp A control of A only
Stomp B B only
Stomp C C only
Stomp D D only
FX X - control of the X slot
FX Mod - mod control
Delay - Delay control
Reverb Reverb Control
Stomp Inverter - This is a strange one, it turns whatever stomp boxes are on off, and off ones on, inverting the stomp boxes.

Footswitches are made to order. Send an email with what you need and I'll put you on a list. You will not pay until your pedal is ready to ship. Current wait times are around a week depending on parts in stock and availability.
Each pedal is tested with a Kemper before shipping out.
All Prices include shipping and handling in the Continental United States. 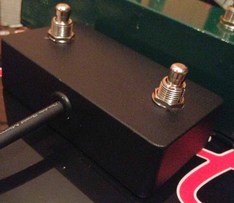 High quality professionally finished aluminum enclosure, with two soft touch momentary switches. Switches with built in cable (pictured) are approximately 20 feet long and terminate in a 1/4 TRS jack for plugging into one of the Pedal jacks on the back of the Kemper. Please note you can still use one jack as a controller - like a Wah or Volume, and use one of these in the other Jack. For a few dollars less this footswitch can be purchased with a 1/4 Stereo TRS plug - then it's up to the end user to provide a TRS 1/4" male plug on each end cable. This allows for a customization of the cable length and performance of the footswitch is not degraded by use of hard wired cable or jack. Black is pictured, all others will be same dark green as the four button switch (which matches nicely with the Kemper Profiling Amp.)

Pedal is approximately the size of a Phase 90/small MXR box. Footswitches are passive and use no power.
59.99 with one 1/4' Stereo/TRS jack (no cable included) 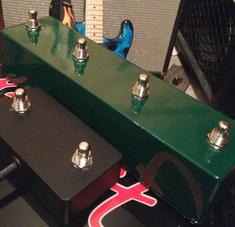 This will require use of both Jacks on the back of the Kemper to access all four buttons. Same switches as the two button footswitch above. Available with two 1/4" Stereo /TRS jacks for plugging in two user provided cables, or a 4 conductor cable hard wired to the switch that terminates in two Plugs that are inserted into the Kemper.

Pedal is approximately 10" long by 2" x 2". This is a solid aluminum pedal, not the cheaper pedal that many use for loopers. It is a little taller than the 2 button switch, but is still sized for ease of use and small footprint. Footswitches are passive and use no power.

89.99 with two 1/4" Stereo/TRS Jacks (no cable included)
Email Link
Please note - I have nothing to do with Kemper in a business sense other than I use their profiling amplifier and make footswitches and profiles. I am not affiliated with them in any way. I'm just a fan. Pricing and specifications are subject to change.

All amp brands and names, and band/song info used in descriptions are trademarked by their respective owners and are in no way affiliated with Pete's Profiles.  KPA profiles found here are attempting to re-create the sound of the amplifiers listed. ANY use of brand names here or within the profiles is only for descriptive purposes and for those of comparison.
©2015 Pete's Profiles LLC | World Headquarters Tulsa OK 74129